DO LAWSUITS ONLY BENEFIT THE PEOPLE WHO BRING THEM?

Most people believe that lawsuits only serve to benefit the person who brings the suit and that the only benefit is the money that the person receives for the personal injuries. This false pre-conceived notion has been widely spread by the insurance industry as well as large corporations both of which seek to severely restrict or limit these claims.

Lawsuits actually serve a much greater purpose than simply obtaining money for the injured party. In the area of product liability, lawsuits do much more. When a lawsuit is brought as a result of a defective and dangerous product, many times the end result is that the product is made more safe thereby avoiding further injury to thousands of others from the same dangerous product.

Our firm handled two product liability cases which resulted in making our country a safer place. In one case, an infant was suffocated and found by her mother the following morning because the crib which was sold here in America was made overseas and was not in compliance with the safety standards that our country requires. That lawsuit was settled allowing the family to be able to purchase another home and thereby remove them from the scene of the tragedy. It also served to change the way in which the importers of cribs now do business. The lawsuit resulted in fewer defective cribs being sold thereby saving the lives of many infants. 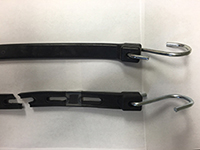 In another case, our firm filed suit when a perforated rubber bungee strap snapped causing our client to lose an eye. The company that manufactured and distributed these straps with holes in them was sued and the case settled. Since that time, rubber bungee straps now are sold without holes. The photograph below on the left shows the strap that was distributed and sold to the general public before our lawsuit and the strap to the right is the one that is now sold.

These are just two examples of how lawsuits improve our society and make it safer by preventing others from being injured or killed because of dangerous products.

We urge you to check the Consumer Product Safety Commission to determine if any products you would intend to buy have defects prior to making the purchase. You can reach their website at www.cpsc.gov.

Renda & Voynick has obtained additional recoveries on behalf of our clients since our last newsletter. An insurance carrier paid $1.035 million to settle the personal injury claims of a 45 year old single mother who was involved in a motor vehicle accident. She sustained severe and disabling injuries to her neck and back which necessitated cervical spinal fusion surgery and lumbar fusion surgery requiring hardware including screws and rods. She had a significant future economic loss which we developed through an Occupational and Rehabilitation expert.

In another case, Renda & Voynick recovered $1 million for a client who was injured when a vehicle crossed over a double yellow line and struck the school bus she was operating in a head on collision. She sustained multiple injuries including a comminuted fracture of her right leg which necessitated external fixation surgery of the right knee followed by open reduction and internal fixation surgery to remove the external fixator and apply hardware including screws and a large plate, a fracture of the right ankle, multiple rib fractures and fractures in her left hand. After recovering the $250,000 primary policy limit of the tortfeasor, we recovered an additional $750,000 from the tortfeasor’s excess insurance carrier.

Renda & Voynick recovered the sum of $650,000 on behalf of a client who was attempting to exit a port-a-john when it was struck by a tractor trailer knocking him to the ground. The client sustained multiple injuries to his shoulders, neck and back which necessitated surgeries for each shoulder and ultimately required shoulder replacement surgery. Although the client had pre-existing conditions, they were relatively asymptomatic at the time of the accident. In the opinion of the medical expert witness, the pre-existing conditions were materially aggravated by the accident.

Renda & Voynick also recovered $335,000 for a client who was injured in a rear-end chain collision accident. Following the provision of conservative care, her orthopedist initially performed shoulder surgery which did not resolve her complaints. Thereafter, she underwent left shoulder replacement surgery. The accident resulted in the exacerbation of previously asymptomatic underlying conditions which necessitated the two surgeries.